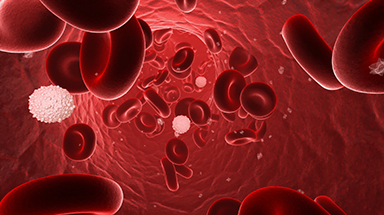 Specifically, the presence of the IDH2 mutation enhances the errors caused by the SRSF2 mutation, preventing cells in the bone marrow from maturing into the red and white blood cells an AML patient needs to overcome the disease. The team is now exploring ways to quickly shut this cooperation down, creating a powerful means to treat blood cancer.

This all started when we were looking at patient data in The Cancer Genome Atlas and saw that again and again deadly cases of AML had both these mutations,” said Abdel-Wahab, a hematologist oncologist. Prior to this research, the only known similarity between the two mutations was that they are involved in pre-cancerous symptoms. But in many cases, the cause of the symptoms is not the cause of cancer itself.

To determine if the IDH2 and SRSF2 mutations are at work in AML, Abdel-Wahab joined forces with Krainer’s lab. The team detailed their findings in a paper recently published in Nature. The researchers knew that one of the two mutations in question, the SRSF2 gene, causes errors in a crucial process called RNA splicing. Splicing converts messages from DNA, called RNA, into readable instructions for a cell. Errors in this process can result in serious cell malfunction. Just because you see a mutation [in a sick patient’s cells] doesn’t really show that it’s directly contributing to the disease,” Krainer said.

Researchers originally did not think splicing defects driven by SRSF2 were tied to AML because DNA tests show the mutations are present in only 1% of AML patients. The Krainer lab, which specializes in RNA splicing, found that this problem is actually much more common, appearing about 11% of the time in AML patients.

Kuan-Ting Lin, a postdoctoral researcher from Krainer’s lab, discovered this by searching for signs of the SRSF2 mutation in RNA. His search could be likened to dusting for SRSF2’s fingerprints within the gene’s actual workplace (RNA) instead of simply searching an entire office block (DNA). Further experiments from Abdel-Wahab’s lab revealed that the severity of the identified SRSF2 splicing errors can be enhanced by the presence of a second mutation, IDH2, resulting in even more defective blood cells.

So in some ways, these two genes, when defective, are cooperating,” Krainer said. “Now that we do know about this interdependence, we may find points where we can intervene.” Blood is a part of the body. Blood has different components such as red blood cells, white blood cells, platelets, and plasma. The red blood cells (RBC), platelets also called monocytes because it belongs to the “myeloid” group and other white blood cells belong to the

Lymphoid” group. Lymphoid cells are affected. The disease progresses quickly. This is most common among children. Blood cancer or Leukemia is actually a group of diseases, each of which impedes the normal functioning of blood cells and progressively weakens the system. Leukemia is classified as either Acute or Chronic. Blood and urine samples may also be tested for various substances, called tumor markers, indicating cancer.

A weakened immune system – this may be a result of drugs that suppress the immune system (such as those used for organ transplants), high doses of radiation (such as in radiotherapy for another cancer), or diseases that affect the immune system (such as HIV). Contact with a chemical called benzene, one of the chemicals in petrol and a solvent used in the rubber and plastics industry. Genetic disorders like Fanconi anemia, Schwachman-Diamond syndrome, and Down syndrome.

In radioimmunotherapy, an immunotoxin–a hybrid molecule formed by coupling an antibody molecule to a toxin–is injected into the patient. The antibody locks onto a signature protein the cancerous cells express and delivers the toxic dose to the cancer cells. Because the treatment is precision-guided, adverse effects on the rest of the body are minimized. Preliminary results with the new drug are auspicious–completely eradicating the human cancer cells grafted to mice.

Your doctor may prescribe medications, sometimes called “growth factors,” that encourage your body to produce more blood cells. Medications are also used to prevent low blood cell counts in people who have a high probability of experiencing complications of cancer treatment. Medications have benefits and risks, so talk to your doctor about the possible side effects of drugs used to boost blood cell counts.

Most people feel confused and overwhelmed when they are told they have leukemia. It’s a very distressing time both for them and their families. An important part of cancer treatment is learning how to talk about how you are feeling, and getting support with the physical and emotional symptoms you are experiencing. For more advanced cancer, you can receive extra support, known as palliative care. Doctors and nurses based in hospitals, hospices and pain clinics specialize in providing the support you need, and can also visit you at home.